Atlantis, The Palm: The Resort
Newsroom

Hakkasan And Ossiano Are Bestowed One Star In The First-Ever Michelin Guide Dubai
To Mark The One Year Anniversary Of Atlantis Atlas Project This World Oceans Day, Atlantis Dubai Announces $500,000 Worth Of Green Investments
Atlantis The Royal: The Resort
Atlantis, The Palm Named Four-Star Hotel In Forbes Travel Guide’s 2022 Star Awards
White Beach At Atlantis, The Palm Joins The Global Ranks Of World-Class Entertainment Experiences By Partnering With Fellow Event Powerhouse The Night League To Bring Palmarama To Dubai
Timothy Kelly

Atlantis, The Palm: The Resort

Located at the centre of the crescent of The Palm in Dubai, Atlantis, The Palm is the first entertainment resort destination in the region. Opened in September 2008, the unique ocean-themed resort features a variety of marine and entertainment attractions, as well as 22 hectares of waterpark amusement at Atlantis Aquaventure, all within a 46-hectare site. It is home to one of the biggest waterparks in the world and one of the largest open-air marine habitats, with more than 65,000 marine animals in lagoons and displays, including The Lost Chambers Aquarium, a maze of underwater corridors and passageways providing a journey through ancient Atlantis. Aquaventure Waterpark features 23.5 million litres of freshwater used to power 105 thrilling waterslides and attractions, including several world record-breaking slides and two river rides featuring tidal waves and pools, water rapids and white-water chargers. Dolphin Bay, the unparalleled dolphin conservation and education habitat, and Sea Lion Point were created to provide guests with a once in a lifetime opportunity to learn more about some of nature’s most friendly mammals. The resort boasts an impressive collection of luxury boutiques and shops as well as extensive meeting and convention facilities. Atlantis, The Palm is also known as the culinary destination in the region where guests can take their pick from a collection of 35 world-renowned restaurants including Bread Street Kitchen & Bar, Hakkasan, Nobu, Ronda Locatelli, Seafire Steakhouse & Bar and the award-winning underwater restaurant, Ossiano. Atlantis is also home to a buzzing nightlife scene with entertainment destination Wavehouse offering something for everyone, while WHITE Beach & Restaurant is the perfect place to unwind with a drink as the sun slips into the Arabian Sea. 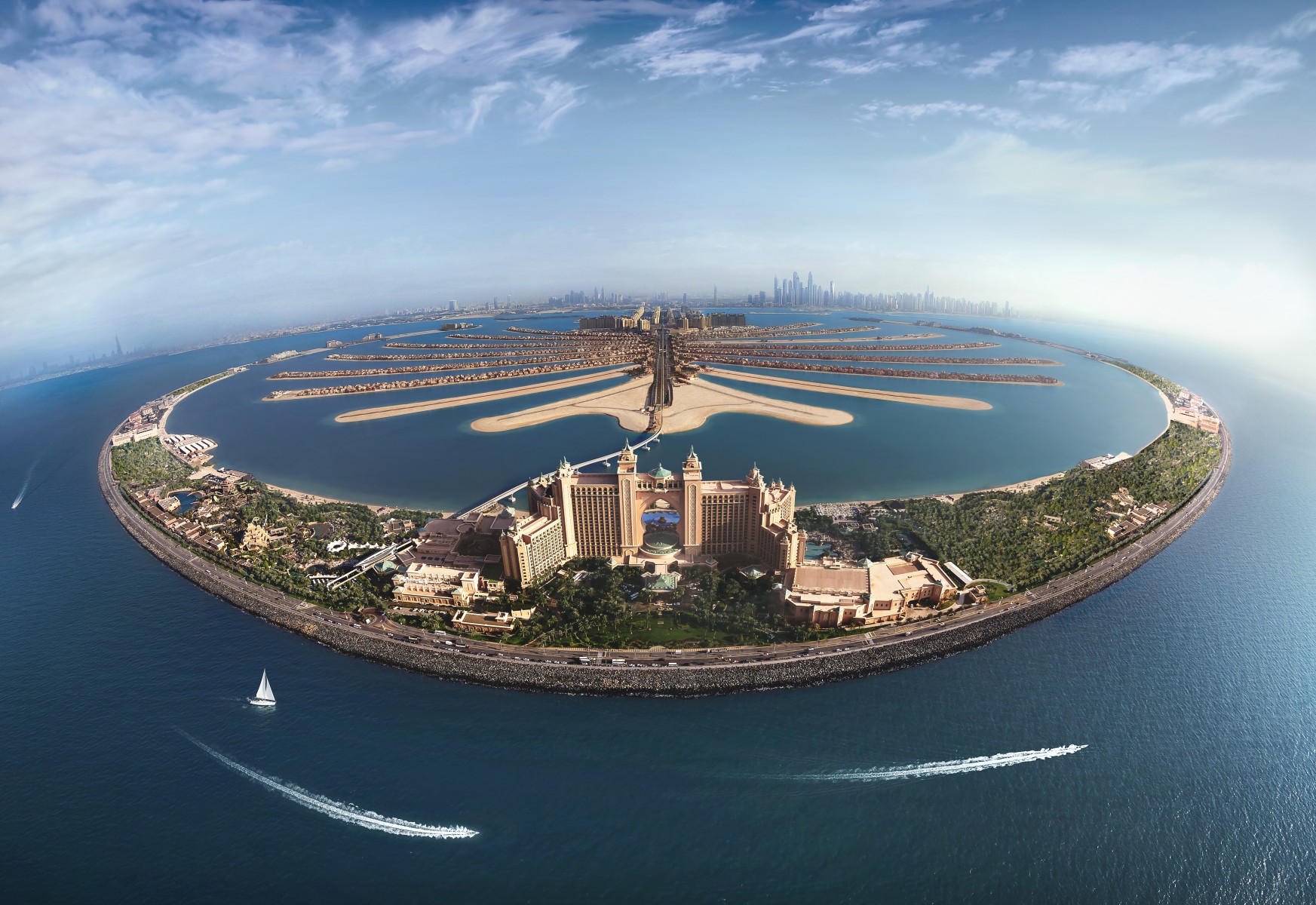 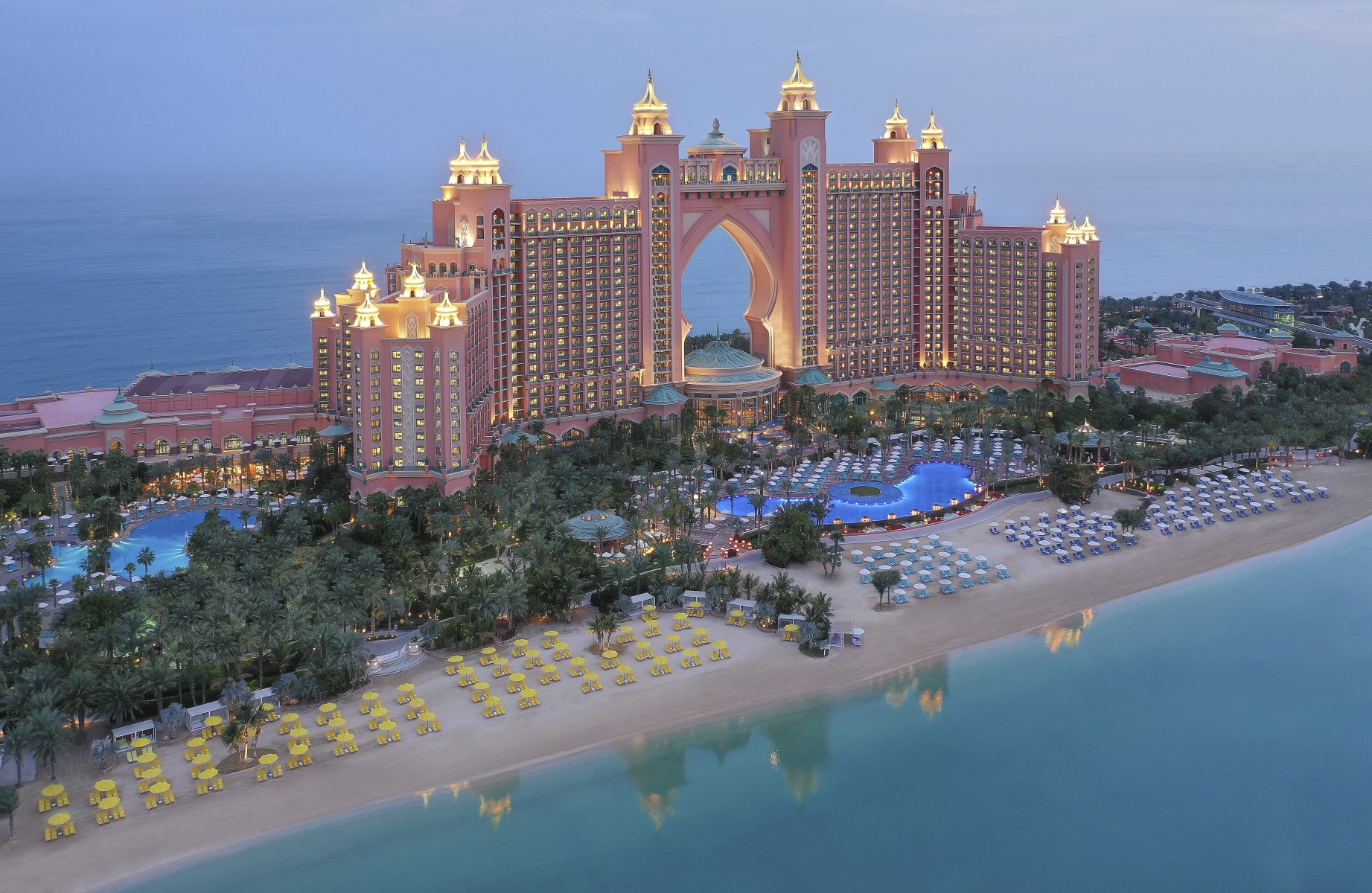 Together, Atlantis The Royal and Atlantis, The Palm will create a unique entertainment destination 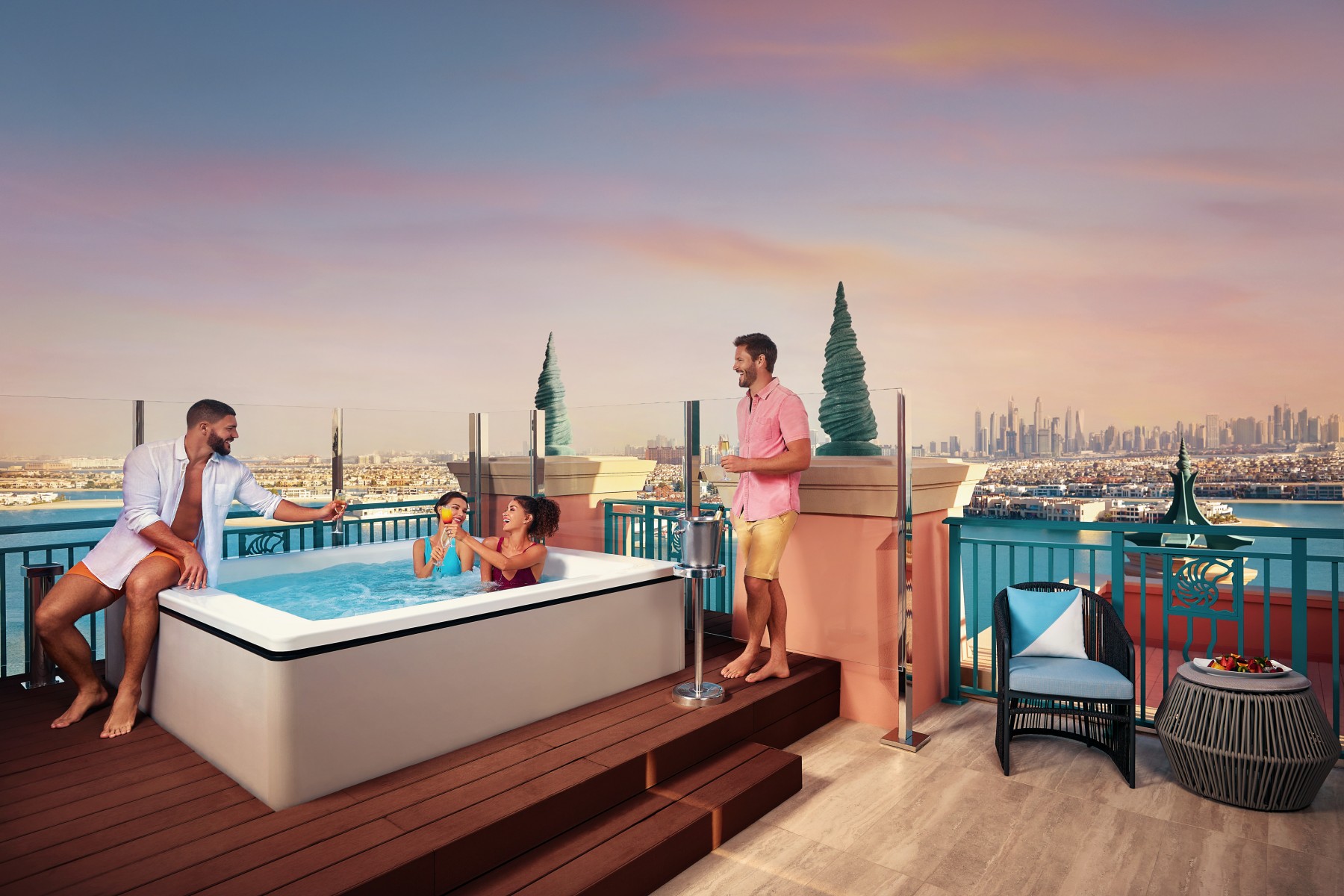 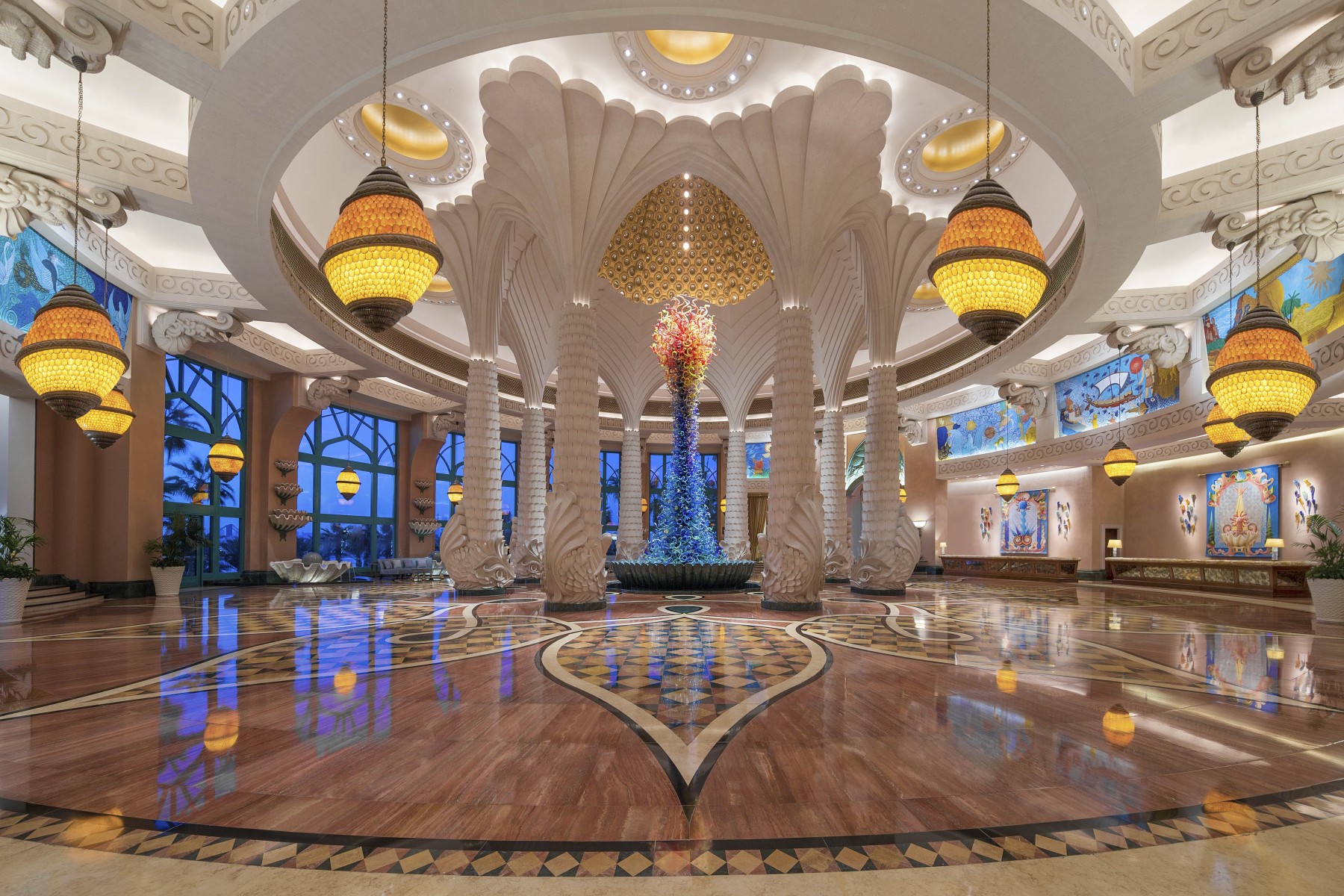 Led by the vision of the late Sol Kerzner, former Chairman of Kerzner International, Kerzner’s brief to the designers was to ‘come up with something that captured the essence of Atlantis (the legendary island that sank into the ocean as depicted in the works of Plato). The result was sun-kissing spires, Moorish archways, Arabian-inspired lamps and palm-shaped pillars tied together with accents of traditional Middle Eastern vernacular architecture such as hand-wrought iron columns of flowers, leaves and buds.

Atlantis was designed by Wimberly, Tong and Goo, an international firm specialising in luxury hotel complexes. The design incorporates classical Arabian architecture in both the interior and exterior of the 23-storey hotel, with semi-precious stones, intricate fossilised shells and 'fish' stones included throughout. The contractor, Laing O’Rourke, developed the hotel envelope using a modular precast glass-fibre/reinforced concrete façade, which was installed by their in-house specialists Emirates Precast. They also developed a pioneering facility to pre-assemble modular bathroom ‘pods’ in a controlled factory environment. 1,500 pods were delivered direct to the site and installed at a rate of 38 per week. The logistical operation to facilitate the build of the intricate design presented challenges. A highly complex operation was set up involving road deliveries, handling and distribution, temporary utilities, communication systems and traffic management . It was completed two months ahead of schedule.

The 19-metre high Grand Lobby presents a dazzling interplay of water, light and sound with a wall of windows offering stunning vistas of the azure waters of The Palm and beaches along the Arabian Gulf. Moving across the lobby’s travertine marble floors, guests enjoy a symphony of sound as a water wall cascades into a babbling pool, a soothing reminder of the surrounding sea. 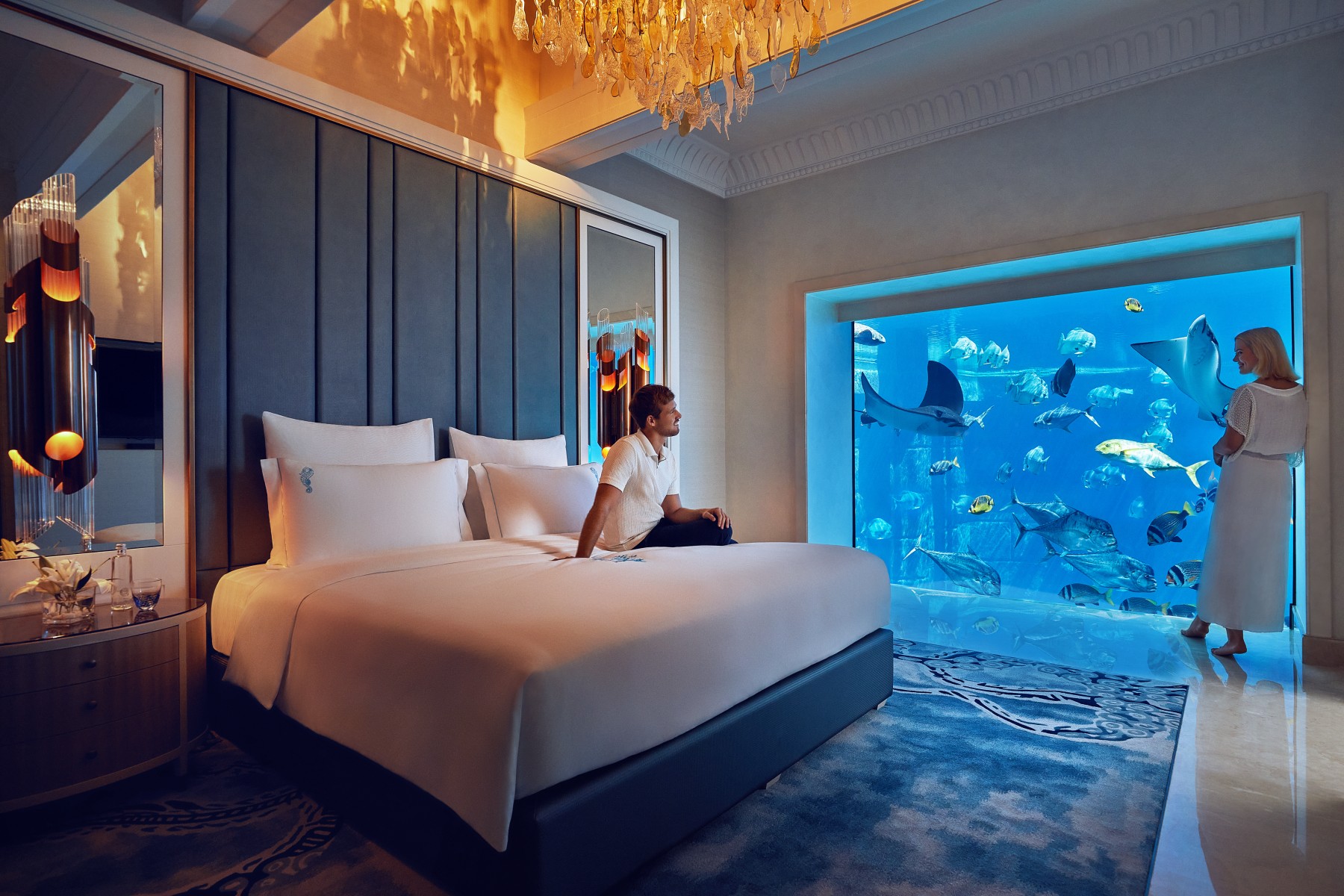 The resort’s 1,548 rooms and suites recently benefitted from an extensive renovation to bring a fantastically fresh look and feel to each and every room. Accommodation ranges from Ocean and Palm Beach rooms (45 square metres) to a series of larger suites, sumptuously appointed with walk-in wardrobes, dressing areas and jetted tubs. Interiors are fashioned in an elegantly understated contemporary décor of earth tones, while vibrant splashes of colour bring the ocean indoors. Decadent bathrooms outfitted with marble floors, granite vanities, rain showers and twin vessel sinks provide guests with a luxurious oasis for relaxation.

You know what they say: it’s the little things that make a big difference and we've got the little luxuries sorted. Imperial Club is a must for the discerning traveler, raising the bar of VIP experiences and transforming a splendid stay into an unforgettable getaway. The jewel in this particular crown? That will be the ultra-elegant Imperial Club Lounge, a refined retreat with convenience, comfort and style embedded in every strand of its DNA. A range of amazing benefits includes a dedicated team to provide personalised service from the moment guests enter, private check-in and check-out, afternoon tea in the distinguished Imperial Club Lounge and much more. 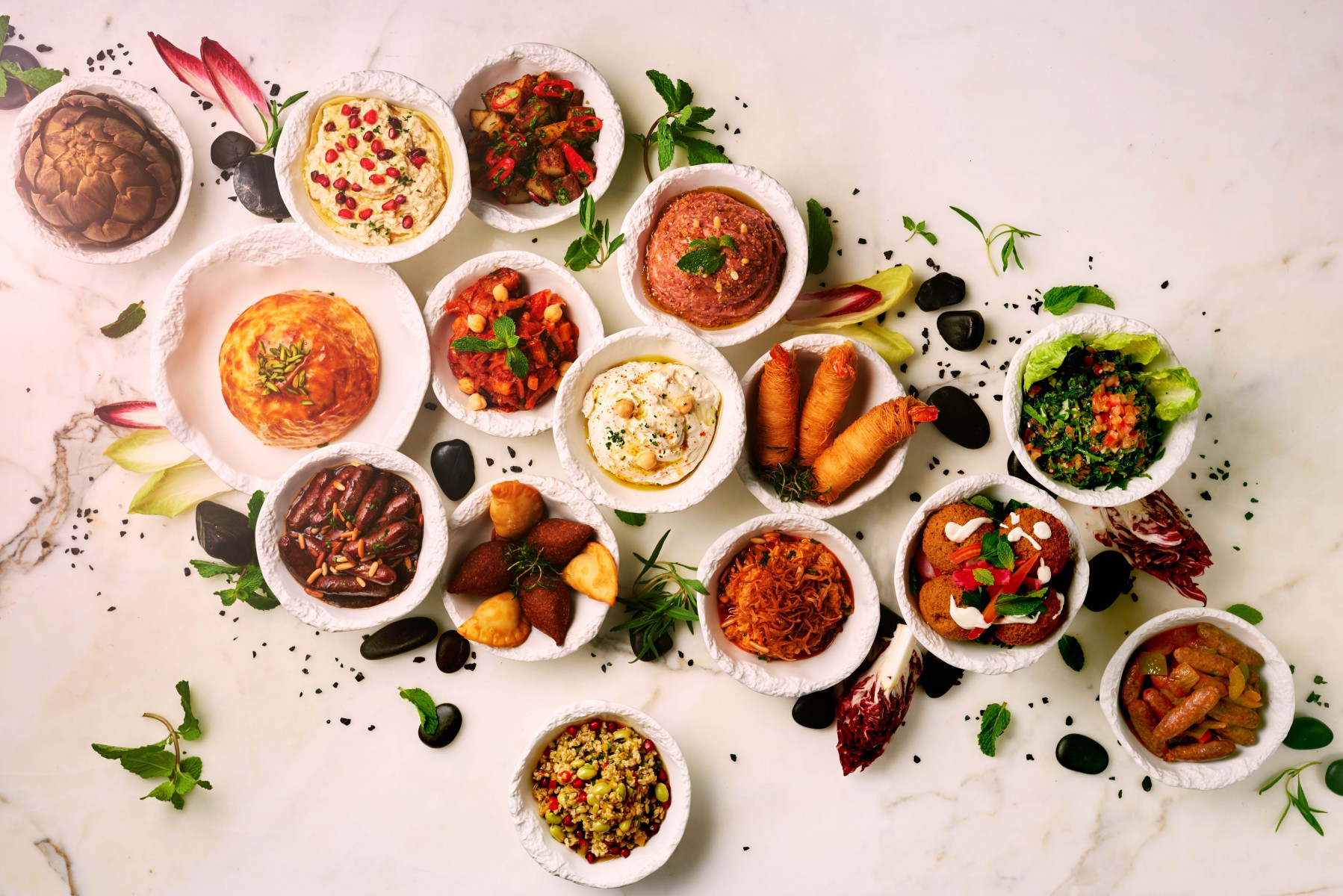 Since Atlantis, The Palm opened in 2008, it has firmly established itself as the place to go for an unrivalled, exciting and diverse culinary experience. With 35 individual restaurants, bars and lounges, guests can enjoy everything from a world-class meal at Michelin-starred celebrity chef restaurants by Gordon Ramsay, Nobu Matsuhisa and Giorgio Locatelli, to an inimitable fine dining experience at the award-winning underwater restaurant, Ossiano. With a vibrant nightlife, chose from all-in-one destination Wavehouse, which serves up fun for all ages, or WHITE Beach & Restaurant, the region’s most sought-after beach club: perfect for laidback lounging and sunset sessions. 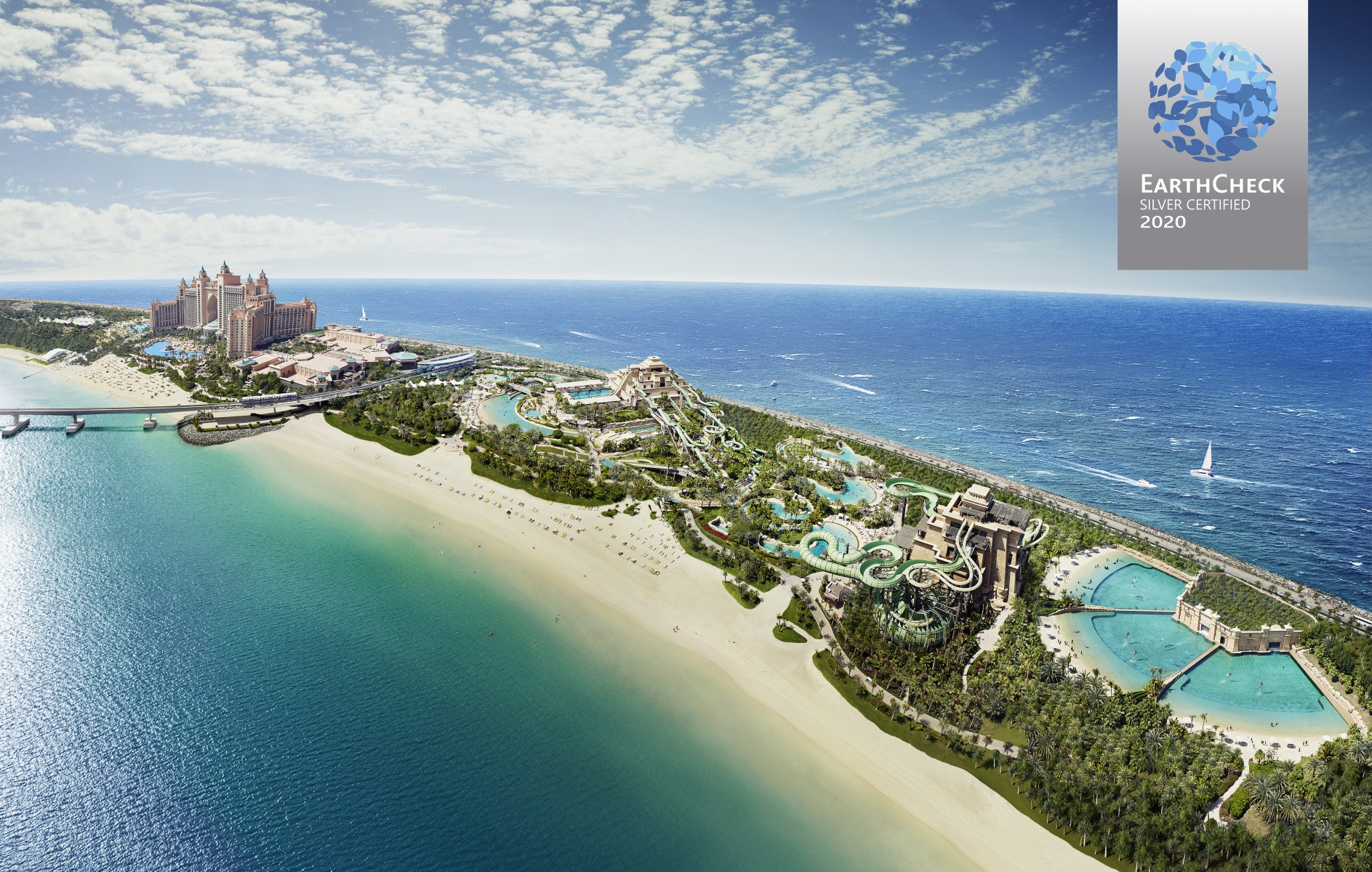 Following an expansion in March 2021, the Middle East’s number one waterpark is now even bigger, a third bigger in fact, making Atlantis, The Palm’s waterpark one of the largest in the world. With the addition of the brand-new Trident Tower, Splashers Lagoon and Splashers Cove, Aquaventure is now home to over 28 additional rides and attractions, bringing the total number to over 105 slides, rides and attractions across the 22.5-hectare park. With several record-breaking slides and firsts in the region, thrill-seekers can enjoy Odyssey of Terror; the world’s tallest waterslide with a Double TornadoWAVE®, Shockwave; the longest family rafting water coaster in the world, Medusa's Lair; the first dueling PIPElineBLAST® Water Coaster slide in the region and Immortal Falls; the first Cliff jumping in the region. Guests can also enjoy 1km of private beach, motorised and non-motorised watersports and 26 marine experiences including Dolphin Bay, Sea Lion point and the shark lagoon. Atlantis Aquaventure also comprises one of the largest open-air marine habitats in the world, with more than 65,000 marine animals in lagoons and displays including The Lost Chambers Aquarium, a maze of underwater corridors and passageways providing a journey through ancient Atlantis. Voted the number one waterpark in Dubai and the Middle East and the second best in the world by TripAdvisor, it is a leader in aquatic theme parks.

Lost for thousands of years deep beneath the sea, the ancient ruins of The Lost City of Atlantis have finally been uncovered. Guests can experience the myth of Atlantis through the resort’s AZA-accredited Lost Chambers Aquarium and The Ambassador Lagoon. With daily complimentary access offered to all guests of Atlantis, The Ambassador Lagoon and The Lost Chambers Aquarium combined are home to over 250 species and 65,000 marine animals including Moon Jellies, Moray Eels, Lobsters, Eagle Rays, and Arabian carpetsharks. These are thriving educational environments for all guests to discover marine life and learn more about how to protect it. Atlantis, Dubai was the first destination in the Middle East to receive accreditation from the Association of Zoos and Aquariums (AZA), the international gold standard for animal welfare, in March 2020. The aquatic destination became a member of World Associations of Zoos and Aquariums (WAZA) in August 2021. 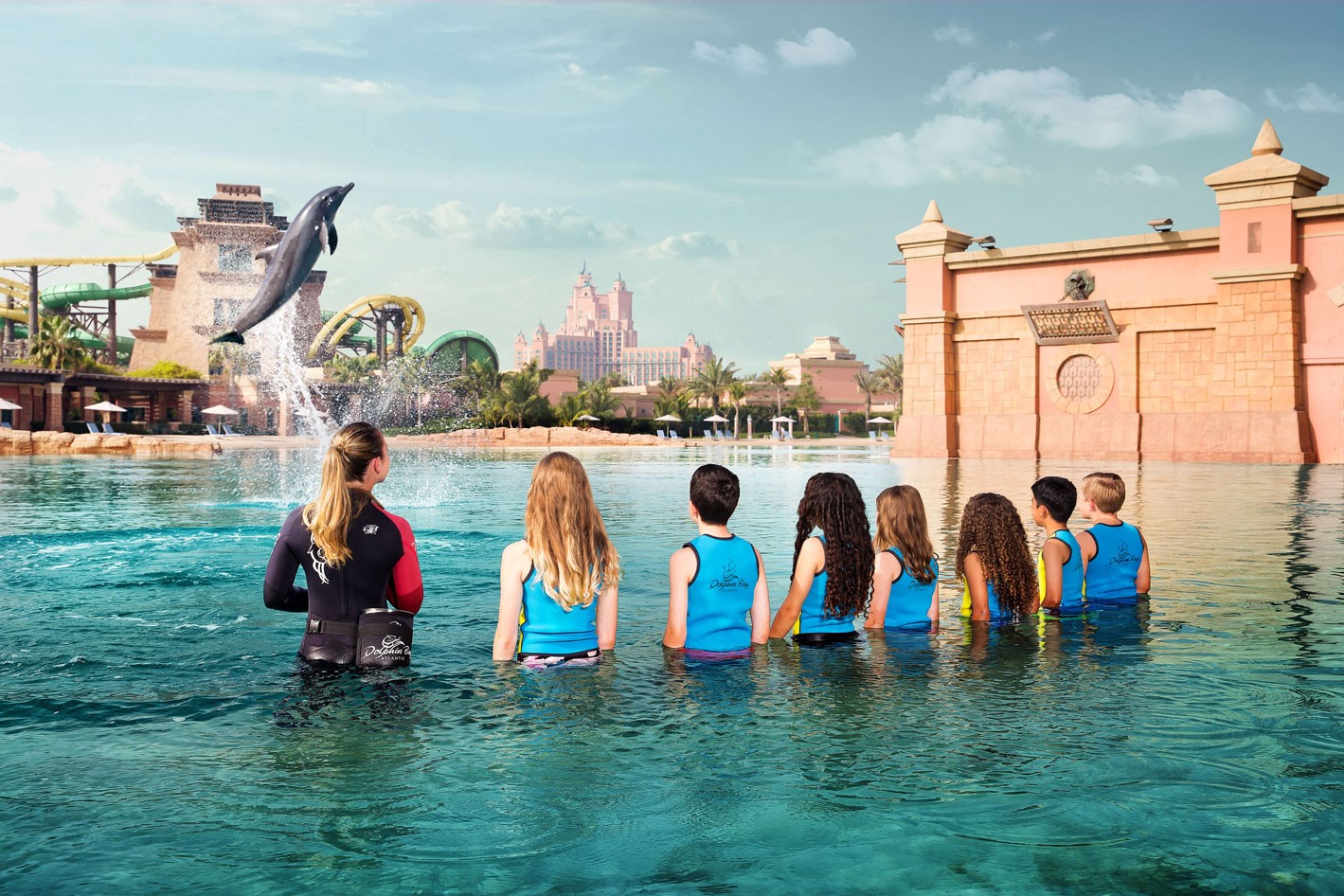 The 4.5-hectare Dolphin Bay is an AZA gold standard accredited state-of-the-art dolphin education centre and interaction habitat which was created to bring enlightenment and education to visitors about one of the ocean’s most fascinating and friendliest inhabitants. Atlantis guests and visitors have the opportunity to meet and interact with these charismatic animals in an unparalleled encounter programme that is enriching for both the guests and the dolphins. For every experience booked, 1 USD will be donated to conservation, sustainability, and environmental education initiatives as part of Atlantis Atlas Project. 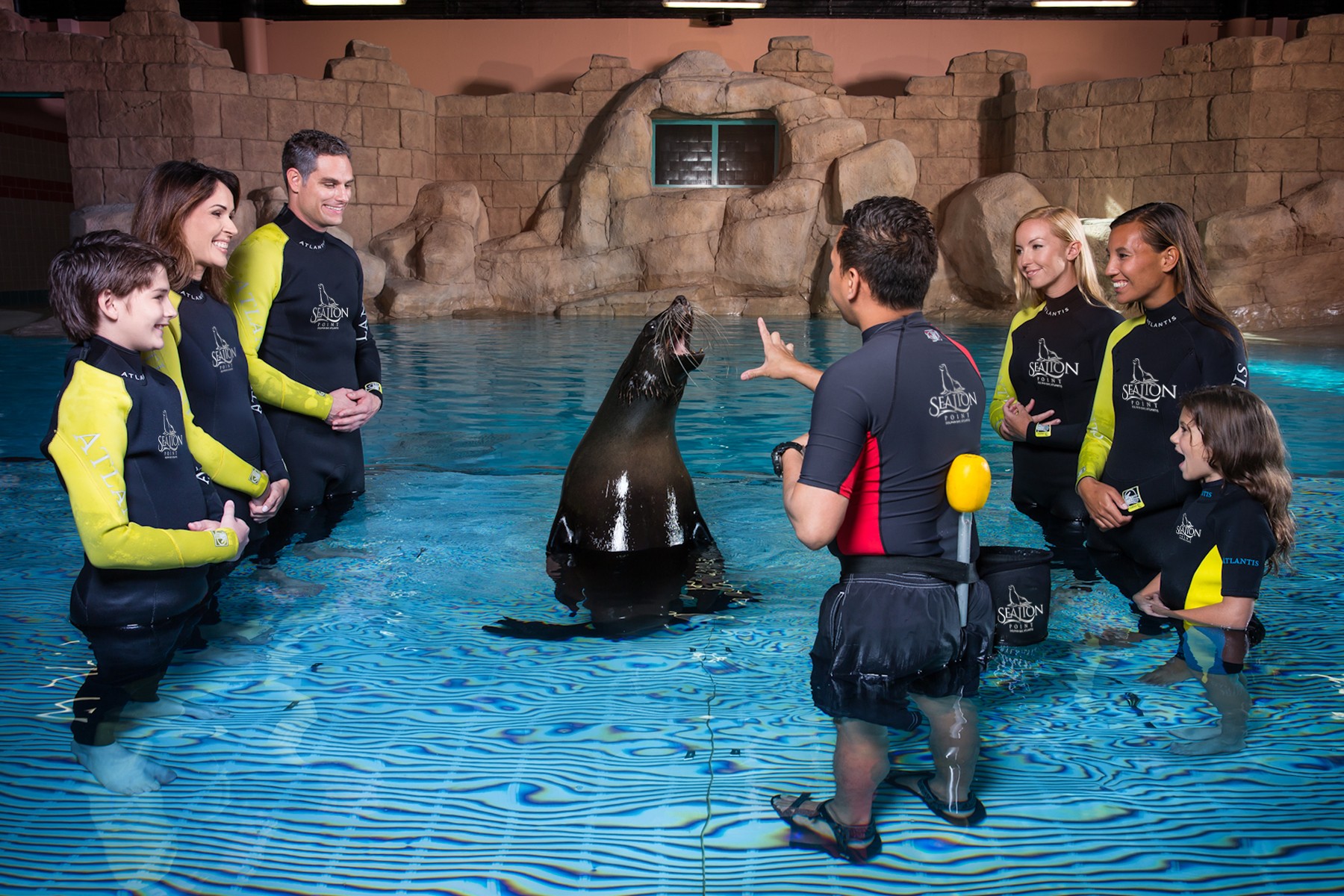 The 4.5-hectare Sea Lion Point is an AZA gold standard accredited state-of-the-art sea lion education centre and interaction habitat which was created to bring enlightenment and education to visitors about these loveable marine animals. Atlantis guests and visitors have the opportunity to meet and interact with these cute and captivating semiaquatic mammals in an unparalleled programme that is enriching for both the guests and the sea lions. For every experience booked, 1 USD will be donated to conservation, sustainability, and environmental education initiatives as part of Atlantis Atlas Project. 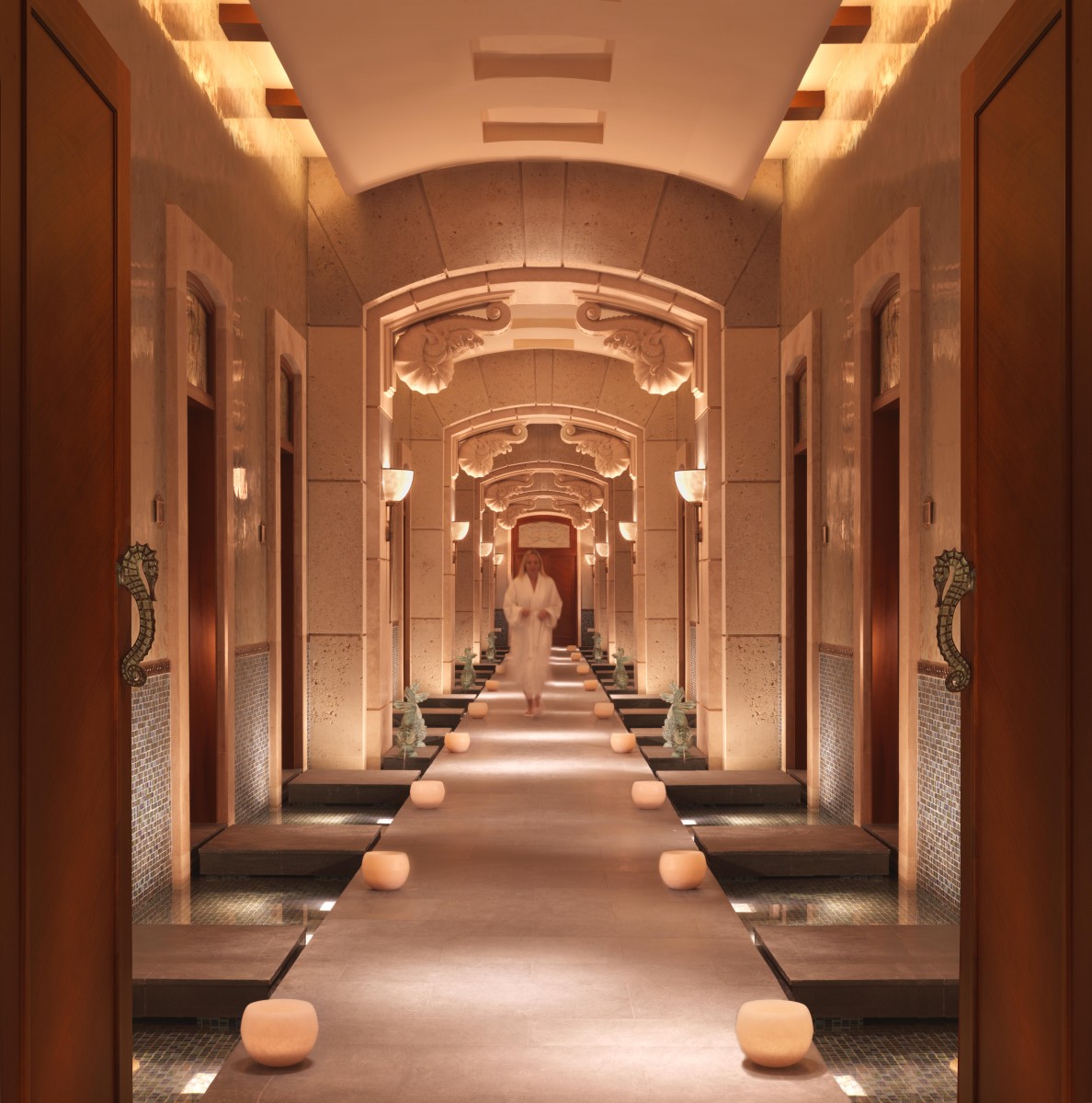 The multi-award winning ShuiQi Spa & Fitness presents a memorable experience for guests, awakening the senses in a setting that is as stunning as it is serene. Upon entering the two-storey 2,400 square metre spa, guests are greeted by a soothing water wall – the start of their relaxation journey. With earthy hues and a water pathway, guests continue on their on their voyage of tranquillity which leads them to one of 27 treatment rooms, for a bespoke treatment, tailored to individual needs. With its extensive menu boasting more than 60 treatments, head-to-toe pampering is guaranteed with a range of restorative facials, rejuvenating body therapies and all-encompassing spa journeys. There is also a separate woman’s-only salon and nail bar as well as a well as Gentlemen’s Tonic for a bespoke haircut and traditional wet shave. 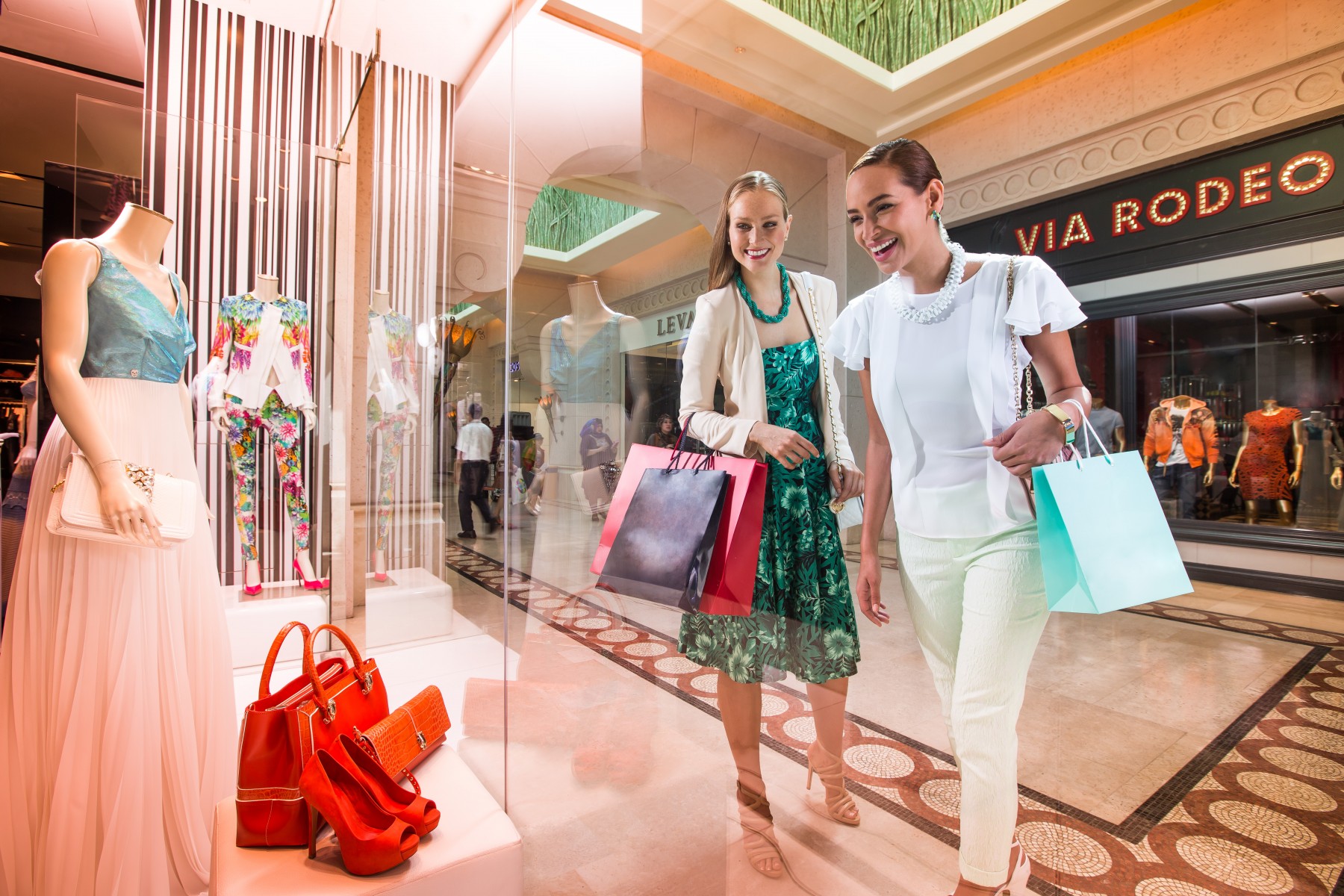 In a luxuriously colourful souk called The Avenues, guests can browse some of the world's most sought-after brands in 2,200 metres of luxury retail space with more than 35 high-end boutiques and exclusive retailers. Offering more than 6,000 product lines, shoppers can pick up everything from watches, jewellery, fashion and beautiful handmade garments from stores including Stefano Ricci, Ahmed Siddiqi & Sons, Rivoli, Samra Versace, Levant and Tiffany & Co. The Avenues offers Atlantis guests and visitors a one-stop shopping destination within a world-class resort experience. 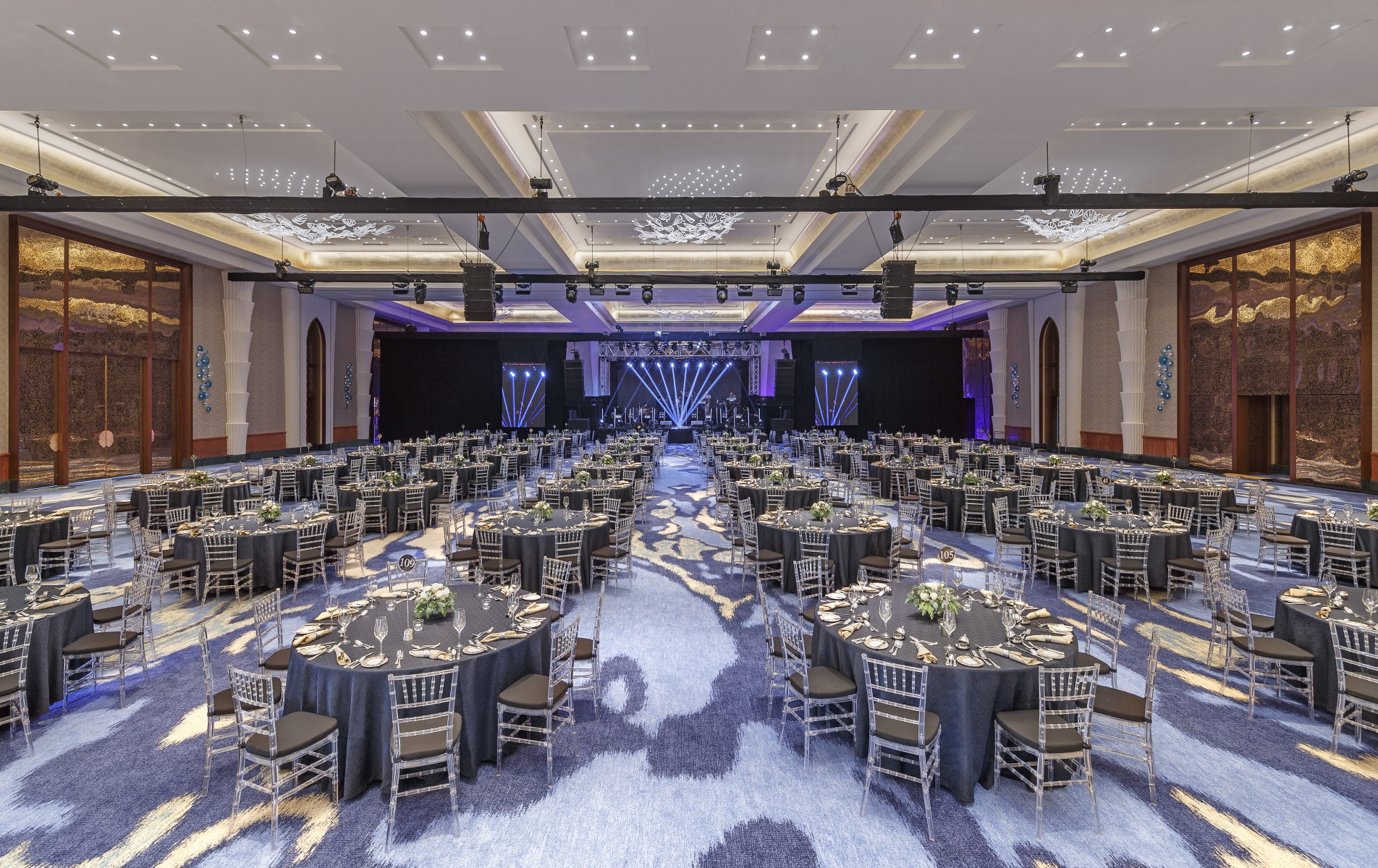 Two unique properties anchored on the crescent of the Palm, Atlantis Dubai shake up the world of luxury MICE, transporting the meetings, events, and incentive travel market to a new league. With spaces of all sizes that lend themselves to a range of buzz-worthy events, spontaneous interactions and private meetings, every engagement is bespoke, exciting and memorable.